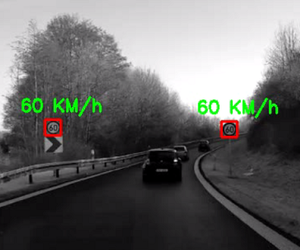 A speed limits and end of restriction traffic signs (TS) recognition system is proposed in the context of enhancing Open Street Maps (OSM) data used in entry navigation systems. The algorithm is targeted to run on standard commercial smartphones that can be mounted on the windshield of the car. The system detects traffic signs along with their GPS position and uploads the collected data to backend servers, via the phone’s mobile data connection.

The probable traffic signs ROIs are collected as the set of object hypotheses . The sizes of the computed ROIs are governed by two thresholds,

, which constrain the sliding window to search only for signs whose sizes are within these values.

are chosen with respect to the probable size of a sign. From the feature extraction point of view, the classification cascade has been trained with Extended Local Binary Patterns (eLPB), illustrated in Fig. 2.

Fig. 2. Computation of the eLBP features for a 70 Km/h traffic sign sample.

The probability of appearance of a traffic sign is computed using six 2D filters, merged within a Bayesian fusion framework. The data fusion problem can be formulated as an estimation of a final traffic sign probability (i.e. speed limits signs and end of restriction signs), calculated from the obtained probability distributions: