This work is based on the theory of feedback control in machine vision, described here. 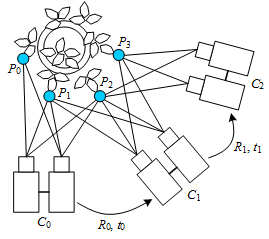 One of the most common approach to passive 3D perception, or depth sensation, is through stereo vision. Basically, stereo vision exploits the geometry between two perspective cameras imaging a scene. By analyzing the perspective views between the acquired images, 3D visual information can be extracted. Traditionally, stereo vision is implemented using a pair of calibrated cameras with a known baseline between their optical points. Having in mind that the geometrical relations between the two cameras are known, by calculating the relative perspective projection of object points in both images, their 3D world coordinates can be reconstructed until a certain accuracy. The problem of stereo camera position and orientation (pose) estimation is illustrated in Fig. 1. As a camera 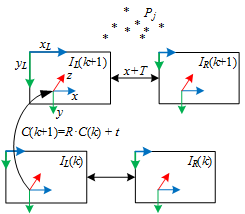 . As convention, these matches are calculated for the left camera only. Knowing the 3D positions of the 2D points matched between adjacent images, the pose of the camera can be calculated through a Perspective-N-Point (PNP) algorithm, as illustrated in Fig. 2. By solving the PNP problem, the rotation

matrices that relate the camera's poses are obtained:

In order to solve the PNP problem, a minimum number of 7 correspondence points between

have to be calculated.

Using a Block Matching (BM) disparity map computation method, followed by a depth segmentation procedure, the problem of controlling the quality of the disparity map

is the relative frequency, that is, the estimate of the probability of a segmented pixel to be surrounded with 8 segmented pixels in its 8-pixel neighborhood:

Keeping in mind that a well segmented image contains a "full" (without holes) segmented object region, it is evident from the above equation that a small probability

corresponds to a large disorder in a binary segmented image. In this case, a large uncertainty

is assigned to the segmented image. Therefore, the goal is to achieve a binary image having an uncertainty measure

as small as possible in order to get a reliable depth segmentation result.

The depth estimation system was modeled according a nonlinear model, where the involved variables are:

is the BM's uniqueness ratio function and

is the predefined uniqueness threshold value. 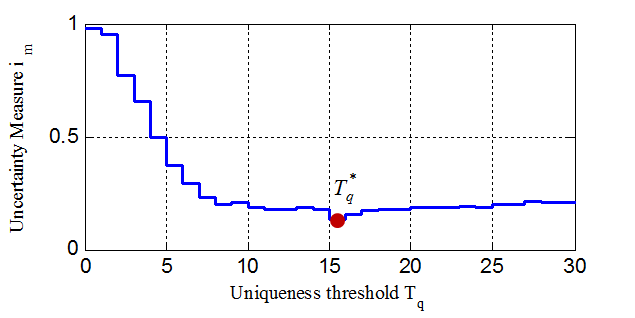 of segmented pixels vs. uniqueness threshold

In Fig. 3, the input-output (I/O) relation between the state variable

and the actuator parameter

is displayed for an example case. The goal of the proposed extremum seeking control system is to determine the optimal value

which corresponds to the minimum of the curve in Fig. 3.

represents the desired value of the uniqueness threshold. The block diagram of the proposed depth sensing system is illustrated in Fig. 4.