An important purpose of artificial intelligence systems is one-shot learning, where the goal is to learn how to recognize objects, or pattern, after a single object instance has been used for learning it's representation. Despite the last decade's breakthroughs in Deep Neural Networks (DNN), one-shot learning remains an unsolved challenge, since DNNs require large amounts of labeled data for training.

In this work, a semi-parametric approach to one-shot learning, coined Generative One-shot Learning (GOL), is proposed, with its block diagram presented in Fig. 1. The GOL method is a generative framework which takes as input a single object instance, or generic pattern, and a small set of so-called regularization samples used to drive the generative process. New synthetic data is generated from the single object instance using a set of generalization functions. The proposed system encompasses a DNN classifier which gets updated with each data generation iteration. The GOL training procedure follows a multiobjective optimization approach, where a generalization energy, given by the distance between the generated artificial synthetic data and the regularization samples, is maximized, while the classification accuracy between each object class is also maximized. GOL has been evaluated on a one-dimensional one-shot learning problem, the MNIST and Omniglot characters benchmark datasets, as well as on environment perception challenges for autonomous driving. 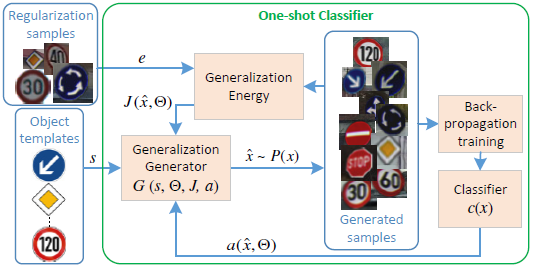 The GOL framework takes as input a set of one-shot objects , along with a set of regularization samples . The one-shot objects are used by the Generalization Generator to generate artificial samples for each object class. The generated samples mimic the real PDF . The samples generation process is governed by a set of generalization functions , where are the parameters of the functions, is the Generalization Energy, given by the similarity between the generated samples and the regularization samples , and is the accuracy of the DNN classifier , trained via backpropagation. The trainig of GOL is performed through a Pareto biobjective optimization technique, which aims at maximizing in the same time the generalization energy and the classification accuracy . The optimal classifier is trained using the optimal artificial samples , obtained once the optimization process converges.