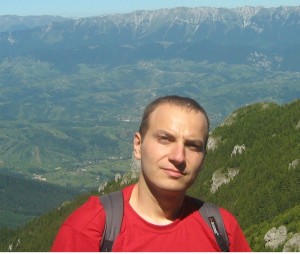 Dr.-Ing Gigel MĂCEŞANU received the Dipl.-Eng. Degree in Control Engineering and Computer Science from Transilvania University of Brasov, Romania, in 2009, and the Ph.D. degree in System Engineering from the same university, in 2012. Since 2010 he is a mamber of ROVIS Lab and, as of February 2013, a lecturer at the Automation and Technical Informatics department in Transilvania University of Brasov. Since June 2013 he is also affiliated with Elektrobit Automotive Romania, where he is the team leader of the Driver Assistance Department. Since 2014 he is also a lecturer at Transilvania University of Brasov. His main areas of research interest are image processing techniques used in active vision systems, analysis of time delay in machine vision systems and object detection and recognition. Gigel was an exchange researcher at the Institute for Systems and Robotics at University of Coimbra, Portugal, where he worked on human facial features detection and Bayesian theory applied to human gaze estimation for human-robotic interaction. In 2011, Gigel was an exchange researcher at the Department of Information Technology, Széchenyi István University, Gyor, Hungary, where he was involved in the development of algorithms for face detection and recognition integrated in mobile robotic platforms.